History of climbing in Meteora

Climbing on the Meteoritic rocks is a very old issue for our area.

In ancient times the inhabitants of ancient Aeginio found shelter in these rough rocks (i.e. Agia) in order to be protected by the attacks of various bandits and pirates of those times (Proceedings of 1rst History Congress of Kalampaka).
Later and especially in the 9th century A.D. many caves were used as hermitages by the monks. Many of these caves could only be reached by means of climbing.

Athanasios Meteoritis, founder of the Monastery Megalo Meteoro together with two monks and the help of a local man (probably shepherd) skilled in climbing, who was also paid for this job, climbed up on a rock called «The Flat Rock» where the monastery is situated today (Nun THEOTECHNI – METEORA, THE ROCK FOREST).

Among other things we discovered, we found information about people who climbed these steep rocks, on routes which, even today, are considered difficult.
The one who climbed ALYSSOS rock for the first time did a difficult «chimney» (V difficulty grade UIAA) at the north side of the rock which even today is considered one of the hardest climbing rocks.

In the 14th century A.D. the Serb czar Stefanos Dussan ordered his soldiers to put a metal cross 1,80 x 0,80 cm at the top of the rock «Agio Pnevma» (Holy Ghost). The ones who climbed to the top did a difficult ascend (at least V+), without any technical equipment. There is a possibility that the shape of the rock might have been different, but even this doesn’t eliminate the danger of climbing. The cross was taken down by a helicopter and it is currently kept in Varlaam monastery.

Other climbing examples are DOUPIANI, AG. TAXIARHES, tower of METAMORPHOSIS (wood-chokes were found in a crack of the rock) etc.

The above information shows us that since ancient times local people, shepherds and hunters have managed to climb very difficult rocks at Meteora, motivated either by their instincts or by financial reasons.

The story of St. George «Mandilas»: A Turk went to a small forest, under St. George hermitage, to cut wood. While cutting it, a trunk fell over him and injured him seriously.

When his wife found him injured, she promised to offer her veil to the Saint as a gift, so that her husband would recover. So it was done and the woman offered her veil to Saint George.

Every year since then, young men climb the steep route that leads to the ruined hermitage, changing the old scarves, offered by local people, with new ones.

MODERN TIMES: Until 1965, Kastraki commune was renting some rock tops to local people, who used to take their herds up to graze in the lash pastures that are there (Sourloi, Modi, Ambaria etc).
During the German invasion, soldiers climbed on AGIA to place the German flag. They probably climbed on «Kastraki Tower» as well.
In April 1970, Berlin climbers Bodo Zoephel and Uwe Weinreich climbed up the tower of NE «Koumaria», «Hawk Tower» and «Shoulder of Meteora». They have never come back to Meteora again.
In the summer of 1970, the already great climber – mountaineer Dietrich Hasse together with his friend professional photographer – mountaineer Heiz Lotar Stutte, came to Meteora. Since then, climbing has become a sport, as it is kwon today. We estimate that more than 200 climbing routes were opened and all 100 rock towers of the field were climbed from 1975 to 1985. That was a very difficult feat since these people were coming to Meteora only in summer and the Greek climbing was in its start. Hasse and Stutte are fairly considered fathers of climbing at Meteora.

As a climax to their climbing activity can be considered the ascend to the east side of Alyssos and the opening of «Community route (VIA2)» from 27 to 30 March 1978 by D. Hasse, S. Eichinger, H. Maegdefrau, H.L. Stutte.

These were An. Tselios, Skarlatos Brothers, S. Athanasiou etc, who together with the German speaking Aris Mitronatsios reached a very high climbing level. In 1979 , an alpine club department called Kastraki Association of Greek Mountaineers was wet up , in co-operation with S.E.O. of Thessaloniki.

During the ’80s more and more Greeks and foreigners came to Meteora. The tourist current of Climbing at Meteora increased tremendously.
In 1985 the Meteora Climbing Fun club was set up in Germany and Austria by Hasse and Stutte. It provided safety bolts to anyone who wanted to open climbing routes at Meteora , for a small contribution to the club.
In 1986 the 2n climbing guide was issued (the familiar blue booklet), a complete book, a marvelous work done by Hasse and Stutte. In the same year, the 1rst Pan-European Climbing Meeting was organized at Meteora, with the participation of top contemporary climbers.

In 1993 the Committee of Mountaineering Safety of the International Mountaineering association (UIAA) held a conference there. Every September since 1993 the Pan-hellenic Climbing Meeting is organized at METEORA, after most Greek Alpine Clubs request.
In 1999 , the 2nd European Climbing Meeting was organized with great success. In the same year the youth committee of UIAA held a conference at METEORA. In 1999 and 2000 the Pan-Hellenic Bouldering Games were organized in Kalampaka. In almost all competitions O.L.K. undertakes all rescues, an indication of the high level of climbing. In 2000, the 3rd Climbing guide was issued by Hasse and Stutte who handed over the climbing field of Meteora to the younger climbers of O.L.K.

O.L.K has a rescue team which has been involved in many rescue incidents helping people in need. It also has a team which maintains and changes all old and wear safety bolts so that the field is always one of the safest fields worldwide.
The 100 towers and about 700 climbing routes create a feeling of fulfillment to the visitor. Climbing is the only sport that supports the area financially. Surveys show that 1000 people who stay overnight are climbers. If we keep in mind that these people come with their families or friends then we presume the number is bigger. We have not taken into consideration the hikers who come to Meteora. Climbers – visitors give life to the area and to small shops since they are not orientated by tourist agencies. So, the financial benefit exceeds the 500 million a year and makes climbing a financial power for the area. The number of climbers is increasing year by year. All climbing schools have at least one weekend included in their timetable at this peculiar field.
There are also many references of mountaineering magazines (and not only) for the good and detailed work that is being done in the field and the influence all over the world is such that it sets as example to others.

NOTE: Climbers main commitment for METEORA : We climb on all rocks apart from the ones, where there are inhabited monasteries. A commitment that is kept seriously by everyone. 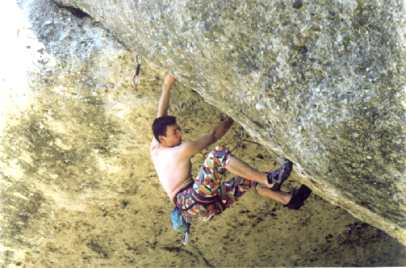 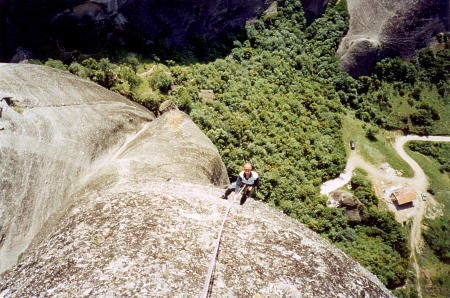 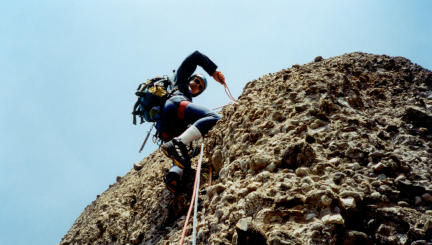