Kalampaka is known all over Greece and the world because of the famous Monasteries that exist on the top of the rocks of the Meteora that are at the north-eastern side of it. Every year, millions of visitors come from all over the world in order to admire and honour them. If it’s needed, they stay at Kalampaka and Kastraki. Kalampaka is a city of rich history and important monuments. The one of the greatest importance is the Holy Church of the Assumption of the Virgin Mary that is at the north-eastern part of the city under the very high rock of Aea.

The city of Kalampaka is built on the feet of the Meteora and it is at the left side of the river Pinios at the point that it enters the plain of Thessaly. It is the starting place for those visitors who wish to be familiar with the monuments and the magnificent sites of Aspropotamos of Hasia, of Koziakas and especially of the Meteora.

The city of Kalampaka is the capital of the homonymous province that takes up the north-western part of the prefecture of Trikala. There, one can find nice hotels, modern campings, restaurants, tourist shops etc.
The ancient name of the city was Aeginion, this is how it is mentioned in the Hellenistic and Roman years because of the great importance of its position. The name Aeginion is witnessed from an enshrined inscription on the wall that is at the eastern part of the church of Saint John the Baptist. At the beginning of the 10th century (901-907) Kalampaka of today is mentioned as Stagi, a name that is preserved until today as a Metropolitan title.

Many travellers passed through Kalampaka from the ancient years until today and they refer to it by the name Aeginion or by the name Stagi or by its present name Kalampaka. At the north-eastern part of the city exists the picturesque neighbourhood of Sopotos, under the rock of the Holy Trinity (east) and the rock of Alsos (north). In the city there are many small churches -country chapels of post Byzantine age. In fact, many of them have admirable hagiographies.

The cathedral church of Saint Vissarion is constructed in the honour of Saint Metropolitan of Larissa, who was the founder and the owner of the Monastery of Dusikos. The church has been hagiographied entirely by John Albanis.

The Byzantine church of the Assumption of Virgin Mary is the most important and most imposing monument of Kalampaka which constitutes a point of reference and adoration for all the faithful people. Despite the significant efforts that have been materialised, it is obvious the abandonment on behalf of the people in change for the systematic maintenance of the temple and the environmental space, too. Let us hope that UNESCO, the European Community and mostly the Greek state will be interested in the maintenance of this appreciable monument of Orthodoxy before it’s too late.

The Church of the Assumption, stands imposingly in the north of Kalampaka.

The church is three-aisled. The aisles separated by colonnades. It has double narthex and three apses.

The temple has received several repairs. The 1573 was the largest since frescoed whole. The time of this remarkable monument erection, not precisely defined. The Middle Byzantine temple dates back to the 10th-12th century. 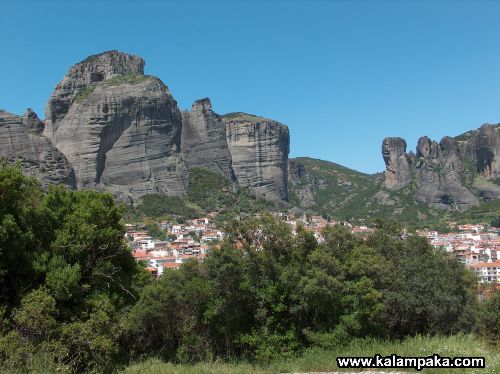